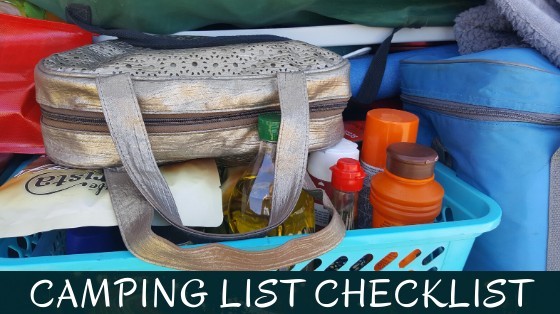 Well folks, I never in a thousand years thought that I would be going on a camping trip after the disastrous trip with three small children and a husband who didn’t know when it was time to stop to set up the caravan, make a fire and feed the hungry mob.

When my sister-in-law, Hazel, invited me to go on a trip with her to Mosselbay, to stay in her caravan, it was a totally different kettle of fish.

You see, Hazel is one of the most organized people I know, we had a #campinglistchecklist. This was something totally alien to me.

The time Matt, the children and I went on a trip and towed a caravan, we didn’t even think of a list, or that the caravan was too heavy for the car we had at the time, and that it would almost overtake us going down the hills.

The most important thing to remember was the dreaded nappy bucket in those far-off days.

Little did we know that when arriving at a really ghastly caravan park in the middle of nowhere, we would be confronted by a dead rat in the bath, should have brought our own bath plug, and many other essential things we thought would be supplied, but aren’t.

You can imagine it was with some trepidation that I agreed to this trip.

Am I happy that I did?

Although we left at the time we had planned to leave, having packed the vehicle the day before, the trip took two hours longer than we had anticipated due to nine, yes, nine road stoppages for road works.

It was a case of make haste slowly.

We decided that as there was nothing else but to enjoy the trip and the really gorgeous scenery, that is what we would do. Not get frustrated by the roadworks.

At one stage we were behind four enormous vehicles which must have been carrying something very important or noxious as these were escorted by not only the usual escort vehicles large vehicles require but also traffic police.

They were in front, at the side of the heavy-duty vehicles and also at the back, stopping all vehicles in front and keeping those poor souls, we included, far behind. There was a traffic police vehicle at the side to keep the oncoming traffic far over to the side of the road, so they could not drive close to these behemoth trucks.

All extremely interesting and I would love to have known what they were carrying.

WHAT A LOT TO LEARN First and foremost, it was what I was to bring along with me. I had a list to make sure nothing was forgotten.

As with a husband and two sons, who all loved making a barbecue (braai), I had never had to light a fire in my life. Or cook anything on a campfire. All the really hard labor took place in the kitchen, while the men stood around with a beer in the hand and cracked jokes.

The womenfolk made salads, cut rolls or heated garlic bread, got the meat sorted out, crockery, cutlery, serviettes, drinks, etc. I made sure there was enough seating for everyone. You women know the drill, I am sure.

Was I in for a surprise?

Making a fire and getting it to the correct temperature for the meat which is to be cooked is a fine art. Particularly when there is a wind blowing, which as we are at the coast is usually the case.

Hazel and I work to a roster, she cooks one day and I clean up and wash the dishes, and then this is reversed the next day.

What surprises me too, is the passing parade, it doesn’t take long to get to know the fellow campers, as they all have their input into what is going on.

They are genuinely interested in what you are doing and if you should require any help, they are there for you.

The wind played havoc one night, and a gentleman from one of the nearby caravans noticed that one of the tent pins was coming loose, without further ado, he got a mallet out and pounded it back in for us. Everyone is willing to help with any task, especially when they realize it is two lone women camping, and that some of the jobs are rather onerous.

Hazel and her late husband, Attie have been camping for many years and have become friends with so many of the regular campers.

When Attie was alive, he and Hazel traveled all over South Africa and Namibia, spending months away from home. This has caused this to become such a way of life for Hazel and although she at one time thought of selling the caravan, she realized it was just not on.

Gosh, I am so pleased she didn’t and also that she invited me along to enjoy this marvelous experience.

Knowing that towing the caravan is rather a skill and also a bit of a worry, Hazel stores the caravan in Mosselbay and then one of the people here set it up on the site she chose, by the time we arrived it had all been done for us.

In a way, I guess, this a bit more like glamping when it is done for you. What a relief when we arrived to see it all set up and ready for us to unpack the car and settle in. When we went off to the mall to do a bit of shopping, I spotted a really fancy Mercedes-Benz U.V. with a gentleman sitting inside.

As Hazel had some errands to run, I decided to chat with Bennett, who I learned was the owner of the UV, sitting waiting while his wife was shopping.

He graciously let me ask him some questions about his fantastic vehicle and he invited me inside to have a look and allowed me to take some photographs.

Gosh, what a bonus.

My word, what a fantastic vehicle.

I was to see another one similar at the caravan site and they also allowed me inside to take pics. The card game carried on while I worked my way around, asking questions all the while.

After chatting to both Bennett and to Eddie and Esme, who so kindly let me take a squizz around these amazing vehicles, I could see why they had chosen to travel this way.

They have everything they could need to enjoy real comfort as well as enjoying the camping lifestyle. What an interesting and glorious town Mosselbay is. There is so much to see and do and the beaches are truly beautiful.

There is definitely something for everyone.

A very worthwhile place to visit. So if you are ever traveling down the Garden Route of the Cape, in South Africa, do yourself a favor and stop for a stay (long or short), and enjoy this jewel of the Cape.

There are many places in which to stay, but even if you have not tried camping before, there are caravans for hire and it is such a great experience.

It is ideal for those who wish to visit the Knysna Elephant Park, Birds of Eden, Go on an Ocean Safari, or even try the Tree Top Canopy Tours.

So many amazing adventures right on the doorstep.