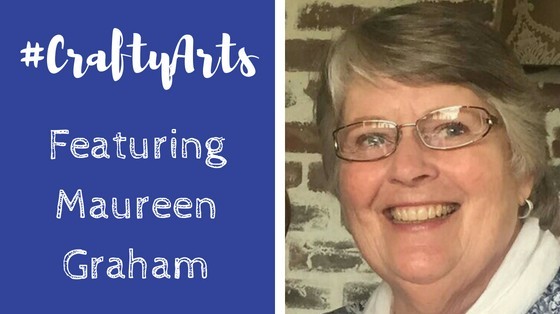 Our first #craftyartist is Maureen Graham.

The Joy of Aging

One of the great joys of aging is that you have your friends for longer, especially if they are like Maureen Graham, who is into #artsandcrafts and is #inspiredbybeauty.

Maureen and I met in Grahamstown when her husband Gavin and mine, Matthew, were both studying for the Ministry.

We formed a strong bond of friendship and have seen one another through good and bad times. We have been friends for 47 years. Now isn’t that just wonderful? I think so.

Out of Chaos comes Order

Maureen is one of the most wonderfully creative people I have met on this amazing journey called life.

She has helped me when I wanted to move around the furniture.

What great advice I got and the results were exactly what I was hoping for.  It all looked perfect at the end of all the hard work.

Thankfully, we had a very able helper named Pamela who worked for me to help shift the heavy things.

In Maureen’s eyes, there is a place for everything and everything in its place. How I wish I could be more like her.

Making the Most of it 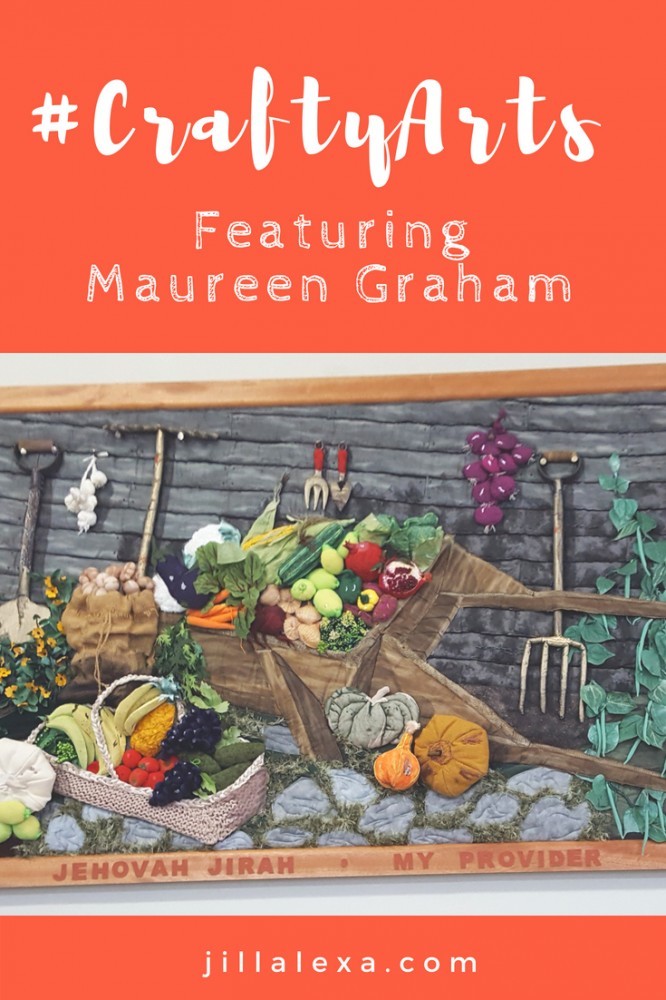 Now, this was a very good skill for her to have as in those days of yore, the Methodist Church would furnish the Manse.

A lot of the furniture had been well-used by the previous minister and family and were often cast-off pieces, kindly donated by church members when they were upgrading their furniture.

It was rather a challenge at times to make this eclectic group of furniture look as good as possible.

As you can imagine, the furniture was always from different eras, not always ugly or totally worn-out but still not new and not chosen by the minister and his wife.

Thankfully this practice is no longer in place.

In the many years we visited Maureen and Gavin in all their various charges, Maureen had managed to make really lovely homes for the family.

All very stylish despite what she had to work with.

It all came down to her ability with her sewing machine and also with her wonderful gift of bringing out the beauty in everything she touched.

A Time to Sew

Two subjects Maureen studied at school were Domestic Science and Art, and these held her in good stead as a home-maker.

She sewed all her own clothing, using her mother’s Singer sewing machine.

Maureen moved to Cape Town when she was 21 and used her mother-in-law’s Brother sewing machine with which she made her wedding dress.

Over the years Maureen and I got to try many and varied arts and crafts projects either together or separately.

We were discussing it when I stayed with them last weekend. We can recall making string light shades that were done by winding the string around a balloon putting cold glue onto the string, and when it was dry, take out the balloon and there were our light shades.

Great fun and very effective and attractive, especially when the lights were on, and patterns splayed across the ceiling and around the room.

These are some other crafts we tried:

I loved visiting Maureen and I still do as she is always trying something new.

She is a wonderfully stimulating friend to have in my life.

While in Grahamstown their first daughter, Catherine, was born.

It was then that Maureen had the fun of making baby clothes and little girls dresses.

She went on in later years to make Catherine’s wedding dress,  all the dresses for the bridesmaids, and her own outfit for the wedding.

This called for a new machine and she purchased a Bernina for the job.

Maureen and Gavin’s second daughter Bronwyn was born in Worcester,  now with two little girls to look after, plus all the Church work expected of a Minister’s wife, there was not much time for all the arty-crafts.

It was the practice of the Methodist Church in those days to send their Ministers around the country to charges where ministry was needed.

This turned out to be a costly business for the Church and they have since changed their ideas on this stance.

The uprooting of the Minister and his family was very disruptive as they might live in some places for a year, then would be on the move again.

A  garden would have been planted up, the furniture upcycled, all for the next Minister and wife to enjoy.

Their move to Port Elizabeth was for me the most exciting one as we had moved there the year before and once again we were able to inspire each other with various craft ideas.

Our children were good friends which helped a lot.

We did so many things together as families.

I have photos of us all on the beach and getting into out the very tiny boat which at first was just a rowing boat. Gosh, did we have fun in that boat?

We then bought a 8hp motor for the boat so no more rowing. It only took four people at a push, so we all took turns put-put-putting up and down the Gamtoos river.

One of the funniest things to happen to us in Port Elizabeth was when Gavin and Maureen invited Matt and I over to watch the boxing match between Mike Tyson and Michael Spinks. This was to come on the television on at about 2 am or some ungodly hour like that.

This venture meant waking our older son of about 8, to stagger half-asleep to the car.

Then carrying the two younger children. Settle them down in the car, and off we went.

It took about 20mins to drive there and then the unloading of children began and getting them down to sleep.

Maureen poured us coffee and we sat in anticipation for the boxing match to begin. It lasted all of 91 seconds.

Unbelievable! The whole process of carrying children etc. was then reversed.

We laugh about it still.

Those were such happy days. Fortunately, for Maureen and Gavin, they were able to stay in Port Elizabeth for quite a number of years before the next move which was to Cape Town.

In early 1990 Maureen and Gavin were sent to Welkom in the Free State to minister in the Church there.

It was in Welkom that Maureen started up her first Banner Group.

One of the crafts she did was painting on wood, making Christmas Tree Advent calendars.

Maureen’s varied Art, Sewing and Craft talents have really come to the fore in all the churches they have served.

As well as being a very active Minister’s wife, she has started Banner Groups in at least four of the Churches they served in, and with the collaboration of the group, have made some absolutely stunning banners.

Together they decide on a theme from the Bible and then work on a design.

This is then drawn up, fabric collected and different members are responsible for various aspects of the design.

On the night of 30th December 1999 vandals broke into the Administration Block of the Church, and when they found they couldn’t open the safe, or any cabinets which might have contained anything of value, they poured oil over things and set the place alight.

Sadly 17 banners were burnt in that fire. All that hard work and beauty have gone forever.

When Bronwyn, their second daughter was married, Maureen saw the need to add to the sewing room by purchasing a Bernina overlocker.

Once again making the wedding dress and dresses for the retinue.

It was at this time that Maureen was diagnosed with Rheumatoid Arthritis.

Living with this has not held my brave friend back from all her many and varied hobbies which give her so much satisfaction and joy.

When they first started making banners, all the fabric, trimmings, beads, etc. were stored by Maureen but she soon realized this was not working for her.

These things take up valuable space and the time looking for the right piece of fabric, trim, etc. was exhausting.

Now they purchase what is required for each project which is much more satisfactory and saves a lot of time which would have been wasted by trying to use up scraps from previous banners.

An Artist – Inspired by Beauty

Maureen isn’t able to sew much anymore due to her Rheumatoid Arthritis and so began Water Color Painting 4 years ago.

It began as a hobby but has become more than that now for Maureen.

She has sold more than 50 paintings. Presently is acting Chairperson of the Art Group in Pringle Bay.

She also belongs to an Art Group that meets every Friday morning from 9am until 1 pm to paint together.

This they have been doing for a number of years.

Along The Way, I Dropped It 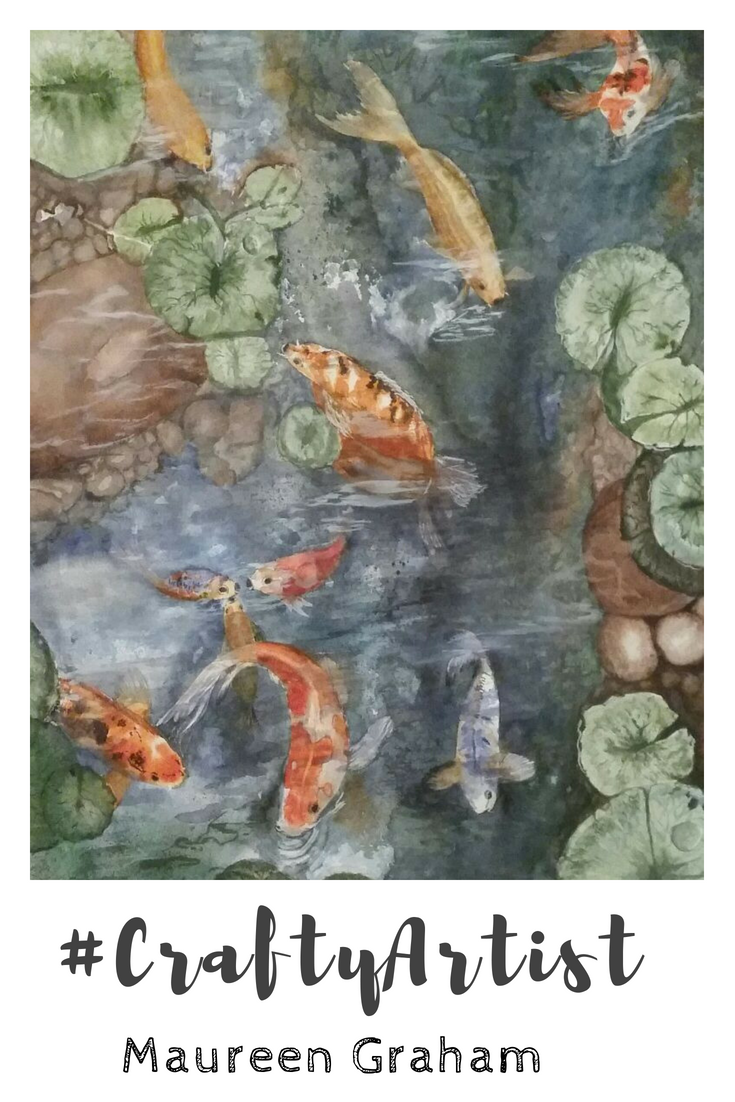 Maureen had a funny experience a few weeks ago.

Gavin drove her to the venue for the painting group and when they got there Maureen paints were missing.

She really thought that everything had been packed into the car but no paints could be found.

Gavin drove back to their house and looked there, no paints there either.

The only thing they could think of was that the paints had been left on top of the car and as they drove they had come off somewhere.

A call was put out to all friends in the area to look out for lost paints and believe it or not, they were spotted at the side of the road just after to the turnoff to Kleinmond.

Most of them were still intact on the palette, only a few lost or broken.

These are Maureen’s Words:

“Through my painting, I celebrate God’s beautiful creation.

Watercolor is my medium.

It is translucent and challenging to work with.

When I am painting I am lost in the wonder of the colors as they merge, move and bring to life something of the splendor that surrounds us.”

Seascapes and animals are the subjects Maureen loves to painting best.

The list of commissioned paintings varies from places that bring back happy memories for people, their pets or homes.

At the moment she has been commissioned to paint a dear little dog that was a beloved pet and another, a painting of a couple with their dogs on the beach, looking out to sea. I can’t wait to see them completed.

When I asked Maureen about the things she couldn’t do without in her studio, she said she is happy with everything she has, but always loves painting with Lukas Paints, and painting on 300gsm Bockingford paper.

Maureen is an optimist, nothing seems to get her down.

I know that she is often in pain, she has to place the work she is busy with, in such a way that it doesn’t cause more pain in her shoulders. 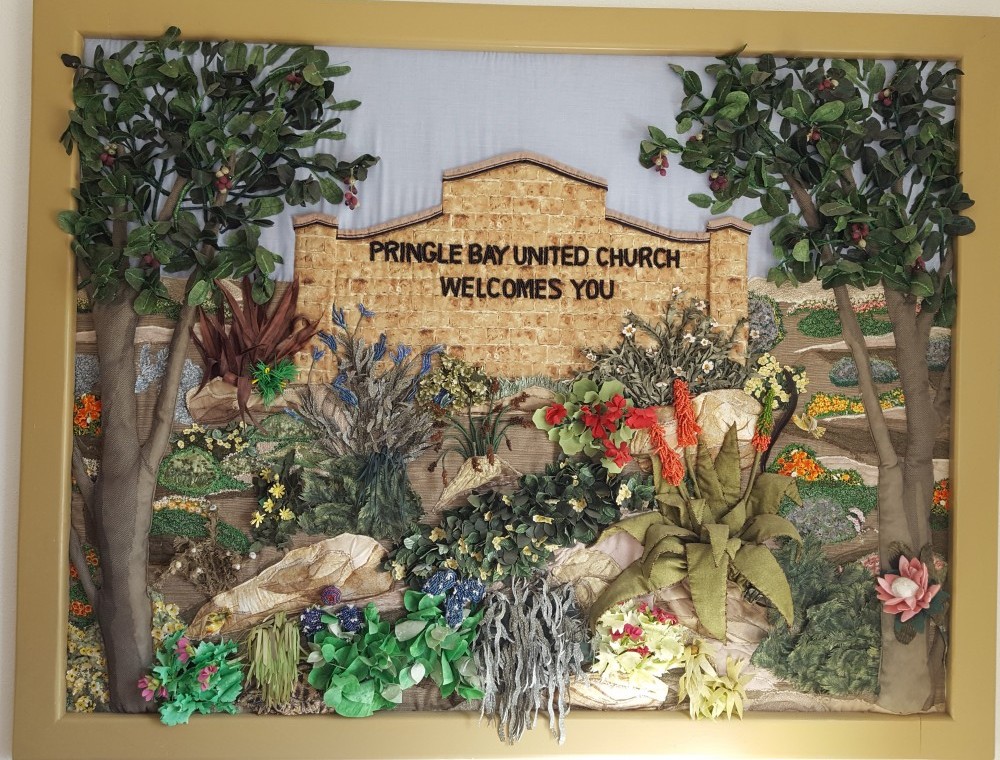 I visit Maureen and Gavin in Pringle Bay, a little seaside village near Cape Town, for what I call my Artist’s Retreat.

I  normally leaving home on Thursday around 11 am and then leave for home after lunch on Sunday.

It is such a treat and I look forward to it in great anticipation.

Maureen and I paint and Gavin looks after us.

We would love to hear from you

You might have tried some of these lovely crafts yourself or are now inspired to try your hand at one or all of them.

Just think of the fun you could have with your friends if you start Artists’ mornings.