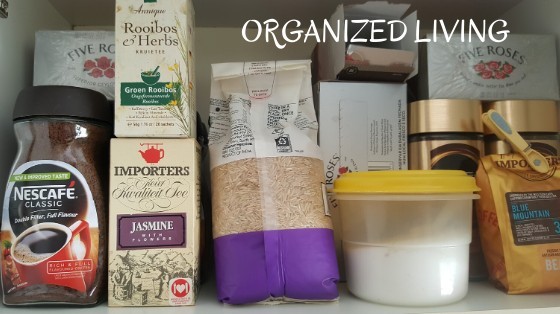 There must be many people thinking of making their New Year’s Resolutions right now. One of the most important in my life was #organizedliving.

Living in a more organized space will make some of the other resolutions easier to accomplish.

Unfortunately, I am one of those people who get sidetracked very easily.

I can begin one chore, for instance, the washing up, and as I like to use very hot water, there is need for it to cool down a little before I put my hands into the water, so I go to see what else needs doing, and get stuck into that chore, all this is what eats up the time.

By the time night time arrives, I am then so weary which is the reason there are always chores left half done.

Just maybe, this resonates with you?

Perhaps there are people out there, just like me and they will find this blog of help.

With the coming of the new year and all the good things that will bring, it was time for me to take stock of my life and my living habits.

Here are some of the Resolutions I have made. Some of them will resonate with you, some won’t.

My advice to anyone as scattered as I would be to call in someone who has a methodical brain.

Fortunately, for me, I knew just the person to approach. My late mother-in-law said that right since early childhood, one could open any of Hazel’s cupboards or drawers, and they would be in perfect order.

Who better to listen to than a mother-in-law for the great advice.

So,  the most natural thing for me to do was speak to my sister-in-law and ask her if she wanted the job of sorting out my kitchen, bedroom and sewing room cupboards.

Initially, she demurred, saying she could never open anyone else’s cupboards and drawers.

I suggested she think about it, she would be earning some money, as I certainly would not expect anyone to work for nothing, and to also think about turning this into a business opportunity.

We are at the stage of our lives when we need to feel useful, and also need to earn money on the side to combat inflation.

Hazel and I were on a caravan holiday together when this discussion took place. Needless to say, we both felt we needed to up our income and were thinking of (legal, hehe!) ways in which to do so.

Fortunately, for me, I am a member of Wealthy Affiliate and have learned how to blog and to earn by blogging about things which interest me, I write posts for various companies, and share these posts on all the Social Media platforms I am involved in.

The following morning, after chatting about the big tidy-up, Hazel agreed to the conditions. Yah!!!

Having seen the way she packed the car for our journey to Mosselbay, in South Africa, for our caravan holiday, I knew she would do an amazing job.

We set a date for her to come to me, which was awaited with great anticipation by me, not so sure about Hazel.

MAKING A CLEAN SWEEP OF THINGS What a sight to behold when bit by bit, the contents of each cupboard in my bedroom was placed onto my bed. Who would have thought all those things could all have been in there.

Where did all that come from?

Naturally, some hadn’t seen the light of day for many a year. Well at least three and a half years, which is when I moved into the flat.

When one moves from a house, even if you think you are being radical when getting rid of things, this is obviously not true of some of us.

We tend to cling to the items we think will come in handy at some stage in our future.

Once all the cupboards were emptied, they were vacuumed, wiped out, dried off, and ready for repacking.

Hazel consulted with me about the items and together we decided on what would happen to them.

We decided on four options.

THE KEEP HEAP – FROM CHAOS TO ORDER The bedding was neatly placed in order on the shelves. Like with like, so that I could see at a glance which set of bedding should be used next.

After picking through the daunting pile, and making choices. I left Hazel to carry on while I went back to work.

That is one of the huge blessings in getting in someone else to organize your space. Especially someone who knows exactly where to put things so that they are easily get-at-able, the order makes sense, and it is in such good order that one just wants it to stay that way.

Everything was sorted out into the correct piles, and what was to be kept, tidily put in the cupboards.

It is such a pleasure it is now to go to the cupboard and pick out items of clothing for the day. What a lot of time and bother this alleviates.

What a relief it was to see the bags of items given for charity going out of the front door with Hazel.

Fortunately, there is a fabulous second-hand store at the retirement village where Hazel lives and they were only too happy to receive all the goodies.

Many books which I would never read again as there are so many new ones out there that I have not read.

The relief I felt seeing the things leaving made be more determined to carry on with the clear out.

My daughter also told me of an article she saw about getting rid of 27 items every day for 9 days. That also gave me the impetus for clearing out more things.

Although I went away during the 9 days, I made a start before leaving, and have another two large bags of things for charity.

Must begin the 9 days all over again, according to the article. Oh my goodness, I wonder what I shall have left at the end of the time?

The clothing was hung up with the hangars facing the wrong way. This way, I will see what garments are actually being used, and which are being kept in case they may come in handy someday.

At a glance, I would then be able to weed out the seldom, or never used garments, and they would go to a charity the following year.

Leave for another year before going through the process again?

The process is on-going and I shall continue in this vein until I am completely satisfied that I am in control of my hoarding habit.

It doesn’t matter how careful one is about hoarding or not hoarding, there always seems to be loads accumulate that are really not worthy of keeping or giving away.

These are the very things that must be tossed.

AND ANOTHER THING – YOOHOO!

Hazel has already been commissioned to organize someone else’s cupboards. So an exciting new business opportunity has opened up for her.

WELL, NOW IT IS UP TO YOU TO DECIDE!

ARE YOU UP TO THE CHALLENGE OF SORTING OUT YOUR OWN SPACE?

ARE YOU IN NEED OF HELP, AS I WAS?

TO MY MIND, THIS WAS MONEY WELL SPENT.