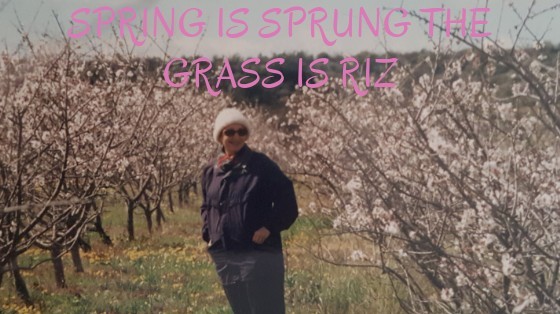 My friends have been commenting on how long the winter has seemed this year, and how cold but the wonder of it all is that no matter how long winter is, spring is sure to follow.

As I was driving out to Riebeek Kasteel to spend the weekend with my sister-in-law, Hazel, I found it rather difficult to keep my eyes on the road, which I certainly had to do as there is a lot of construction work going on. It is going to be wonderful once it is all finished but in the meantime, one has to keep one’s wits about you.

The canola is out in full bloom, and it made me realize how wonderful that #springhassprungthegrasshasriz, which makes our spirits happier. This is the time to visit the Western Cape as all along the Garden Route, and right up to Kammieskroon and beyond, the spectacle of wild flowers is to be seen to be believed.

Living in Cape Town we are blessed with a wide diversity of the floral kingdom right on our doorstep.

NO TIME TO REST ON YOUR LAURELS Once Spring arrives, along with the wonder and beauty of nature, come the weeds. Here a lot of them are called “fynbos”.

One day, soon after we arrived in Pinelands, seeing the state of the garden which was to my mind very boring and neglected, I was out working my fingers to the bone, when along came one of our “kindly” parishioners. Peering over the garden gate at me here comment was, “cultivating a nice lot of weeds, I see.”

My hackles rose, and I replied, “Oh no!. This is fynbos.”

I think she took the hint. We did not become bosom buddies.

It took a lot of blood, (mostly my Dad’s, as the was always coming in for plasters), sweat and a few tears to get the garden looking really beautiful. The effort was worth it.

The roses bloomed for months on end. Matthew kindly made a lovely archway over which Blossom Magic bloomed for many a year. In fact when we moved and the new tenants in the manse moved in, who were not at all interested in the garden. That brave rose went on blooming for ages, although all the other bushes died off, one by one.

I stopped looking into what was once such a beautiful garden, as the sight of the dry sand made my spirits sink and me very sad.

To my mind, it is better for people who are not interested in gardening, should live in apartments. To make gardening easier throughout the dreadful drought we have experience in the Cape I am now concentrating more on water-wise gardening which is not only indigenous but also many of the lovely plants from Australia grow very well here.

Another blessing is that there are so many indigenous plants that attract birdlife. It is so fascinating to watch the variety of birds visiting the garden and to see what attracts them.

After moving from the manse and beginning a new garden in a different suburb, I thought long and hard about which type of garden would really bring us joy. The indigenous garden won out.

This did entail major changes, as I realized if I wanted to attract wildlife to the garden, then streams and ponds needed to be built.

Between Matthew, our two grandsons Nathan and George and I, we managed to build a pond in the back garden and, later a stream which ran into a pond, in the front garden.

What amazed us all was just how quickly the dragon and damson flies, frogs, skinks, snakes (fortunately non-poisonous), and the birds found the water sources.

We were very fortunate to have a well point on the property when we purchased it. This was a real God-send as we rigged up a watering system which watered certain sections of the garden on separate days.

I kept a book to write a variety of birds which visited our garden, which was not particularly large. During our time we had 34 varieties, besides the visiting budgies, parrots, and lovebirds which had obviously escaped their cages. This made me very sad as it was impossible to catch them and keep them safe.

A PICNIC IN THE BEAUTY OF THE NATURE RESERVES

We were fortunate to enjoy many picnic outings in Posberg Nature Reserve up the West Coast which is the closest Nature Reserve, besides Kirstenbosch, to us.

We love going to Posberg during the flowering season. Besides the glories of the wildflowers, we also encountered many animals, bat-eared foxes, ostriches, kudu, springbuck, tortoises, etc.

Knowing that her parents and friends loved going on picnics. Lauren kindly gave us a special canopy which kept the wind and also was impregnated with something which helped to keep the harsh sun from burning us. I can’t tell you of the excitement we experienced the first time we used it. It took a while for us to work out how to set it up, but once up we settled down very nicely inside and enjoyed our picnic without being blown away or perishing in the heat

Putting it up was no problem at all What a puzzle. How to fold it up again?

The problem came when we wanted to pack up and fold it up again. Well to tell you the truth, there is a definite knack to this which try as we might. Amid gales of laughter. Turning it this way and that, it had us all beat.

Eventually, having to admit defeat, it was put into the trunk of the car, fully opened.

We gave it to a friend who was an engineer and they also picnicked a lot.

Let me tell you it lived behind their couch, for years fully opened, as even Andy could not work it out.

LET YOUR JOY BURST FORTH LIKE FLOWERS IN THE SPRING