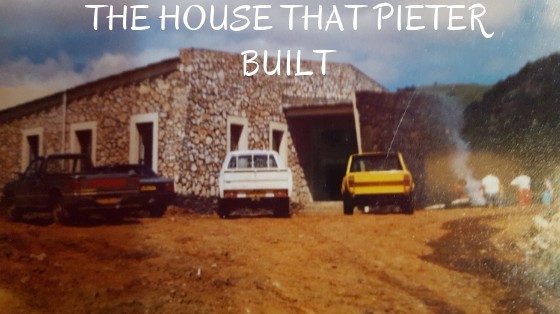 STEPPING OUT IN FAITH

Today, I want to tell you about a family that has inspired me, and also my family over many years, and about #thehousethatpieterbuilt which is the most interesting home, and well worth sharing with you as to how this was accomplished.

My husband was the Minister of the Presbyterian Church in Vryheid, in Northern Kwa-Zulu Natal and during that time he also conducted a service once a month at a small wood and iron Church which was owned by the Anglicans, but which they permitted us to use, in Paulpietersburg which is 53ks away from Vryheid. Among the worshipers in Paulpietersburg was Annemarie Wenning and four of her five children, the eldest daughter, Bonita, was working overseas at that time.

They live on the family farm, Emerald Acres, having moved there in 1974 in the Paulpietersburg district. As Annemarie’s husband, Pieter was not with her on that occasion, Matthew, being the good Pastor that he was, said not to worry he would call around at the farm soon and meet him.

One day during the following week, he did just that and found Pieter at the building site of the home he was starting to build. He and Annemarie had, as farmers do, paced it out and marked where they wanted the rooms to be and so on, and now the trenches were in the process of being dug.

When Matthew walked up to the site, wearing a traditional white safari suit, which was customary for the clergy and doctors to wear at that time, Pieter asked him, “What are you selling?”

“Oh, no”, Matthew replied, “I am not here to sell you anything but to give you a gift. This gift has already been paid in full, by the blood of Christ”.

Pieter was so taken aback by the reply and because Matthew showed so much interest in the planning and the layout of the building and as he and Pieter walked around (in the mud) they discussed the building and, of course, the church. Thus began a firm friendship which lasted until Pieter passed away many years later and we returned to Paulpietersburg for Matthew to conduct Pieter’s funeral which was held in the large Dutch Reformed Church, the little wood and iron church would never have held all the people who attended and came to pay their respects to the family.

The entire family attended worship each time Matthew preached in Paulpiettersburg and we more often than not had Sunday lunch with the Wennings at the farm.

When I was away on a trip to Kwa-Zulu Natal recently, my brother, Myles, kindly took me on a road trip to visit Annemarie, who with her eldest daughter Bonita, and her two sons, Guy and Dominick, are carrying on with the farming.

Staying with Annemarie is always such a pleasure and while there I asked her if she minded that I write about their farming endeavors and about the building of the house. She graciously said I could, so here goes.

The children were growing up, they needed more space, and the house they were living in didn’t suit their growing needs and so they went ahead and planned the house of their dreams.

Knowing Pieter and Annemarie as I do, I can imagine that they planned this very carefully and as Pieter had artistic talents (inherited from his world-famous artist Grandfather, Pieter Wenning). He probably made a sketch of what their combined ideas.

Something I do know is that they physically measured the rooms out by pacing out the area designated for the building.

As with all buildings, when the trenches are dug, it always looks smaller than the size it will turn out, and so they kept adding on until they were both satisfied.

This method has resulted in an enormous home with generous rooms, with a unique character.

The house has 6 bedrooms, 4 bathrooms, an enormous main living area, sewing room, laundry, study, games room and a smaller, more intimate lounge. Underneath the kitchen area is the workshop and garage. The digging of the trenches and removing soil to flatten out the top of the hill on which the house is built was a mammoth task and required a lot of time and effort on behalf of Pieter and his workers.

All the time this was happening, naturally, the work on the farm had to carry on.

Fortunately, as with all the Wenning family, Annemarie and Guy were not averse to hard work and besides helping with the trench digging, they carried on with the farming.

There were chickens to raise and sell. They had a butchery on the farm and this and the chickens were just a part of Annemarie’s many farming enterprises.

In fact, it was the raising of chickens since 1974 that kept the farm going for many a long year.

Very recently they stopped keeping chickens as feeding them has become extremely expensive and also it has become too dangerous to sell to cash buyers at the farm gate.

THROUGHOUT THE BUILD THE FARMING KEPT GOING

Not only did the chickens need to be attended to but there were also the peach orchards to see to. Anyone who has ever had peach trees knows that a lot of work goes into the fertilizing, watering, pruning to keep them producing the best possible crop which would later be sold.

Another crop grown on the farm was radishes for feeding the herd of Gir cattle which were Pieter’s pride and joy. These were too precious to slaughter and only the old cattle and weaners were sold.

Pieter was so fond of his cattle and they would be brushed regularly.

The family, Annemarie, Guy and the two younger daughters, Rosanna and Moya, who were weekly boarders and were only home at the weekends, managed to keep up with the farm chores.

Oh, dear, chores sound like easy things that people give their little children to do for pocket money to teach them the value of money, believe me when I tell you the work they all did, and still do, is what I would call, physical labor.

When they initially moved to the farm in 1974 Annemarie kept chickens which she continued to do until just recently – that is what kept the farm going throughout the bad times.

Unfortunately, it has become too dangerous to sell to cash buyers at farm gate now and with the feed so expensive, she has now given up keeping chickens.

Due to difficulties beyond their control, building on the house came to a standstill and took eight long years to complete.

In 1989 the entire farm burned out due to negligence by railway workers. The main railway line to Richards Bay runs right through the middle of the farm and trains with more than 100 trucks filled with coal go through there all the time.

The fire devastated the farm, the entire orchard was burned out,

They were kept waiting for many years for the case to be wound up, and for the compensation to be paid for the fire damage.

This delay did not mean that background work was not being done regarding the building. There were umpteen things still to sort out, the least of which was the sourcing of the stone required for the cladding of the house, the slate for the flooring and also finding a competent company to make the roof beams, which were enormous.

All the burned tree stumps had to be removed and the ground made ready for another crop. And after a lot of investigating done by Annemarie through contact with the Department of Agriculture, they decided that the area in which they live would be suitable for growing oranges.

As their farm is organic, all the compost is made on the farm. This was made using the vegetation on the farm and also utilizing the worm compost generated by the millions of worms bought just for that purpose.

In 1990 they planted 40 hectares of orange trees

THE LONG HARD SLOG TO GET THE BUILD FINISHED

Can you just imagine how much work still needed to be done? The laying of the conduit for the electrical wiring had to be complete before the concrete could be poured over them and then it all smoothed out.

Then it was time for the slate for the floors to be laid. This was done by two women and they did a wonderful job.

The slate was sourced in Rustenburg which is a long way off and sent by train and carefully unloaded at the siding and transported on the tractor-trailer to the building site.

Slate ships and breaks very easily so this had to be very carefully handled.

The lovely rose quartz, which is used for the cladding of the entire house, barring the front wall, was sourced in Luneberg and transported to the farm.

Luneberg is 35 kilometers away from Paulpietersburg and I think another approximately 10 kilometers from the farm.

The Red Jasper stone was found in the Pivaan River and also at Manzane on a Hillside.

Digging this from the hillside and the riverbed must have been another exhausting job but the effect this makes on the front wall of the building and also the enormous fireplace inside, is well worth all the effort.

Putting up the beams was one of Guy’s jobs and it took an entire day to put one up. There are 7 beams 24 meters long and 5 beams 16 meters long. They were so heavy and so unwieldy and the work was really dangerous as the building is extremely high.

All the woodwork on the ceiling was also done by Guy and the timber that was left was used to make the impressive work station in the kitchen. Nothing was wasted

What jubilation and celebration when the house was finished and the family moved in.

Once all the thanks had been said, the party was on.

The braai’s (barbecues) were smoking, the food set out and it must have been a huge relief to everyone, especially this amazing family and their workforce that this long-awaited day had come. Everyone, celebrated in their traditional ways. What a great day!