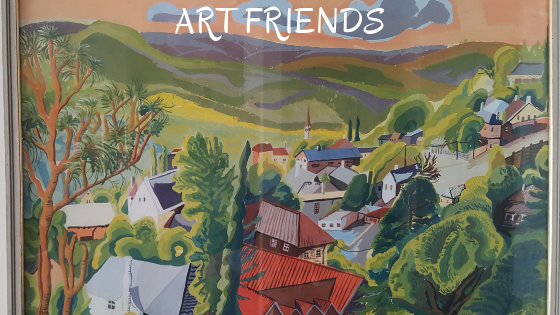 A TIME FOR EVERYTHING On thinking back on the amazing friends I have made over the years, it got me thinking of Ecclesiastes 3. It is so true that there is a time for everything, and this is so obvious when looking back on all the hobbies and interests I have had over my lifetime.

Not only the hobbies but also the friends who shared them with me.

The friends that have been with me through thick, and thin. The dear souls with whom I have laughed and cried. Enjoyed the privilege of sharing joys, and sorrows, and confidences over so many years.

FRIENDSHIPS THAT LASTS THE TEST OF TIME, AND DISTANCE

One of the many things one has to get used to being in the ministry is the constant moving about. Although it is an exciting time it is also very disruptive to family life, and disconcerting. Doubts and fears come into play.

I once heard a joke about a minister’s child being asked where his parents were, and he replied, ” Dad is on his knees praying about moving to a new church, and Mom is busy packing”.

This is something I can fully understand.

Whenever there was a move afoot, due to a calling to a new parish, that is what it was like in our household.

The worst thing about moving was the dreadful feeling of leaving your friends behind, not knowing what the reception would be in the next congregation. One thing I knew for certain was that I would never forget the friends I had made, and would keep in touch with them, and this is what we did throughout the years.

As with everything, there are pros and cons, and it was the same as the system of moving in the Church.

We all, individually, and as a family developed long-lasting friendships, and it also taught the children to be comfortable, and to get on with people of all ages. While my husband attended lectures at Rhodes University and despite me holding down three jobs, one full-time and the other two, part-time. I still managed to have a wonderful time in Grahamstown.

One of the friends I made was Lorraine who taught me pattern-making which was very handy then, and also later on when we went to live in Port Elizabeth.

Matthew was always a very keen and accomplished photographer, and living in Grahamstown afforded many opportunities for great photoshoots. Not many kilometers from Grahamstown is Bathhurst and then further on is the lovely sea-side town of Port Alfred.

At Art Club, I became friendly with Sandy Ward,(who painted the picture of Grahamstown, which is at the beginning of this post) and she and Geoff and their little daughter Sarah spent many happy hours with us on the beach. Sandy and I would discuss ideas of paintings we wanted to do. Our little son, Warwick and Sarah played happily in the sand and the two men would wander along the beach for Matt to take photographs, or just sat relaxing in the sun.

Sandy went on to study art at Rhodes but she continued to come to Art Club and we remained friends throughout the time we were there. Sadly I have lost contact with them.

Another artist friend from Grahamstown days is now living in Pringle Bay and Maureen, Gavin, and their girls and we as a family have remained very close friends. This is a friendship that has definitely lasted the test of time.

Whenever I can, I go and spend time with Maureen painting, while Gav looks after us while we paint. What luxury, and bliss.

Maureen’s artistic ability is reflected in every aspect of her life. The powers that be in the Church, decided that once the newly fledged ministers had their degree, a good idea would be for them to move to what was then called “the Reef”, now Gauteng.

We were sent to a small town called Krugersdorp (dorp being the Afrikaans word for a town).

It was all very exciting, although daunting to be the new minister and wife, and by then we had two little boys and I was pregnant with our third child.

While we were busy unpacking all our goods and chattels, a young woman and her three little boys arrived.

When I went out to meet her as she came along the path, her first words to me were, “Hi, I am Kirsty Housten and a member of the Krugersdorp Presbyterian Church, and I just wanted to welcome you.” She had made a meal for us.

Her kindness was overwhelming. Kirsty was to become my closest friend for the next 46 years.

We had so much in common, besides children. We spent hours painting, cooking up a storm, (she taught Home Economics, so had plenty to teach me), cake icing, sewing, and it was Kirsty who introduced me to machine embroidery.

When we left Krugersdorp to live in Port Elizabeth, we kept in touch, and have done so throughout the years.

Most times when we went up to Krugersdorp on holiday, my trusty machine (Bernina) would be in the trunk of the car. I knew I could always have the use of one of her embroidery machines when I got there.

If and when I flew up, the machine would go with me, and I must admit to having to pay extra for all the fabric, threads, and other sewing paraphernalia which came home with me.

It was not uncommon for Matthew to allow me to go up to spend time with Kirsty. Especially when we came to Cape Town to live.

When Kirsty’s beloved husband John died after suffering a heart attack, Matt and I drove up. Matthew to conduct John’s funeral service and me to stay on with Kirsty and help her with the garage they owned. I remained with her for two months. Sorting out the multitude of business things that one has to do after a death.

The times spent with Kirsty were always fun, they will live with me forever.

After leaving Krugersdorp, and moving to Port Elizabeth. St. Columbas Church was such a busy church. So much going on. So many opportunities for meeting new friends.

One of whom was Lorna. She and I would also spend hours sewing together, and then we decided to take our sewing to the next level and enrolled at the Port Elizabeth Technical College and learned to tailor.

What a challenge, and what great experience. The only downside was the criticism I had from a few members of the Church for spending so much time with Lorna. It was frowned upon.

Fortunately, it was only a few, and when I began giving sewing lessons in the Church Hall for the members of the Young Wives Club, and anyone else who wanted to come, I think I was forgiven.

Another thing that happened in one of the many halls we had at St. Columbas, was gym classes run by another friend, Dot Redman. These were such a load of fun. When we were about to leave to go the next charge, Vryheid. A very small village in Northen Kwa Zulu Natal, I told Dot how much I would miss the classes.

Her reply to me changed my life. “You must begin your own classes when you get to Vryheid. With your ballet background and with gym training, you can do it.”

Dot really gave me the courage and affirmation I needed to attend training at Warmbaths which came up quite soon after we arrived in Vryheid.

Although I had a bit of opposition from my husband, I stuck to my guns and went.

This was a turning point in my life, as it gave me the confidence to begin my first business venture.

Although moving around was not the easiest thing to do with a family, and all the changing of schools, Churches, the adjustments in various ways of life, I have been truly blessed with the many wonderful friends I was privileged to learn to know and love very dearly.

If it were not for the very things I found frustrating with moving, these friendships would not have come about.

Naturally, I have not mentioned all the friends who mean so much to me, and from whom I have learned a great deal.

WHO OF YOUR FRIENDS?

Has been instrumental in changing the course of your life?

HOW WAS YOUR LIFE CHANGED?

By becoming friends with your friends.

WHY?  YOU NEED TO VALUE YOUR FRIENDS

As I said at the beginning of this post, There is a time for everything. The time you have with your friends is now.

My beloved friend, Kirsty died unexpectedly. Her funeral was on the 1st of August.