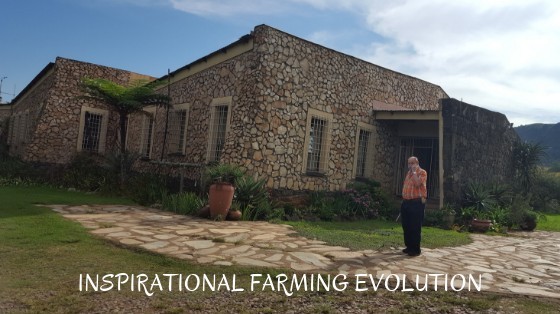 Farming has always seemed to me at least, an absolutely idyllic lifestyle but that was before I realized what farmers have to deal with on a day to day basis.

The story I want to share with you is one of an #inspirationalfarmingevolution which I was witness to over many years.

It is a story of love, laughter, tears, overcoming loss, hardship, pain, and sorrow and through it all, succeeding.

FARMING IS NOT FOR THE FAINT OF HEART

The work begins early and ends late. When the outside work is done for the day, there is always paperwork to catch up on, and planning for the next day to do in the late afternoon and evening.

Just as our lives change and our circumstances change with the passing of time, we evolve into who we are today. The same goes for our homes, gardens, etc.

So it was with farming friends of mine and to their farm. Pieter and Annemarie married in 1961, and with their five children moved to the family farm in 1974.

When I first got to know the Wenning family, their eldest daughter lived and worked overseas. The older son worked with his father and mother on the farm. The two younger daughters were in high school and the younger son was about three or four years old.

At that time they farmed chickens, fitches (little furry creatures like mink), cabbages and sheep. That was many years ago and over the years many things happened to change the landscape of their lives and that of the farm.

We all have things happen which we have to learn to live through, but some people seem to have more to contend with than others. When I think of what this family went through in the years I have known them, it amazes me to see the strength of character each of them has.

Realizing that the family home was becoming too small for the growing family, the couple decided that they would build a new home on the farm.

This was an enormous undertaking and was going well until in 1989 a fire swept through the farm burning all in its path. As the fire was started by negligence by the railways whose line ran through the farm, it took years for the court case to wind up and for reparation to be paid.

The peach orchards were gone, which meant that one of their main sources of income from the farm went during that dreadful event.

The building of the house was halted and in the end, it took eight years to complete. Chicken farming kept the farm going during this very difficult time. After careful research into the viability of what would be the best crop for their area, it was decided that they would plant 40 hectares of orange trees. This they did in 1990.

A packing house was built near the orange orchards for cleaning and sorting the oranges. As this is an organic farm, it is important to follow all the rules and regulations to keep it totally organic.

Eventually, the trees began to bear fruit and buyers from overseas had been to see them check that it was indeed an organic farm, they put in order for the oranges. When the fruit was ready seasonal pickers (around 50 to 70 women) arrived and the reaping began.

The reaping, cleaning, sorting, and packaging of the oranges is an enormous job but it had to be perfect for export quality control.

As you can imagine things can and do go wrong when one has to rely on others. There were many problems with the refrigerated truck hire. One, overturned which meant a loss of the oranges.

There were also problems at the port with strike action so that the crates of oranges could not be off-loaded in time, and the oranges ended up being spoiled due to the time spent waiting for the strike to end.

Then there was the problem of thrips, a blight on the oranges which although does not alter the taste it marks the orange peel so were not suitable for sale overseas.

After all the problems it was decided that they would rather sell the oranges locally and after finding outlets for the crop, this is what they did.

Naturally, as the oranges were not sold on the overseas market this changed things in many ways and although they did not have the worry of the refrigerated trucks, the strike action, etc. there was always the concern of getting all the oranges sold, and at the right price to make it a viable crop.

MAKING THE MOST OF THE ORANGE ORCHARD

The orange crop is reaped from June through to August but the work doesn’t stop when the reaping is over, as, beneath all the trees large nets (6 meters wide) are laid out to catch the blossoms which fall.

During September and October, the blossoms are collected and dried.

The dried blossoms are bagged and put into containers and sent to Germany where they used in tea blends. This fact came as a big surprise to me as I had imagined that they would be used in essential oils. When one loses their spouse of many years it comes as a dreadful shock even when we think we are prepared for it.  Pieter developed cancer. Annemarie nursed him for a number of years before the passed away in 2010.

Grieving and also seeing to all the formalities and endless paperwork one has to do after the loss, must have been horrendous.

Through all this, farming could not come to a stand-still.

The children rallied together to help take a lot of the burden from their mother but soon after the funeral, this amazingly strong woman, took over the reins again and with the love, help, and support of her family they have made more changes.

which he had got from Kenya, and had tried his hand at distilling the oil

With the very small still he had it took an entire day to produce 1oz. Of oil. He received a very large order and there was no way in the world he would be able to supply that amount so at that stage he gave it up as a farming venture. He advised Annemarie that whatever she does to always have the products before trying to sell anything.

After cutting branches off the original trees, they were sent to Cedara to be stilled and tested to see if this would be a viable crop. It was found that the properties were still the same as they were in 1965 and it was certified organic.

Pieter’s father had great faith that one day this oil would be the saving of the farm and Annemarie took that to heart and she sent the seeds to a nursery for them to plant up and when the seedlings were ready she planted up all 2000 seedlings.

The wonder of it all is that Annemarie took her father-in-law’s advice about the importance of the oil and now has two boilers for distilling the oil. They now produce approximately 5 pots, 40kilograms of oil per day.

She has also managed to plant up (Melaleuca alternifolia) which is the medicinal tea tree. Annemarie picked seeds from her trees and found them to be extremely difficult to get to grow, after asking for advice from the university in Pretoria, she phoned me with the exciting news that all her seeds were now growing and she had sent them to the nursery to plant up and then when they are bigger, she will get them back and plant them.

The ground was being cleared when I was there for the planting of these new trees.

THERE IS ALWAYS SOMETHING TO BE DONE ON THE FARM

There was so much going on when my brother Myles and I visited Annemarie and family and this is what makes it so interesting as a visitor.

They had to put up a new and bigger solar system to enable them to get electricity to the water pump, and because of all the beautiful trees that Pieter planted it meant going higher. Dominique had built the stand and workers were busy putting it all together for the solar panels to be attached. At the end of long, hard, busy days, there could not be a more beautiful spot to sit and contemplate the day almost over and plan for the days to come.

What could be more satisfying than looking over the farm at the orange orchards and realizing all you have achieved through hard work and determination.

SO NEXT TIME YOU DRIVE INTO THE COUNTRY

When you drive along a country road and see the beauty of the farmlands, give some thought to the hard work that has gone in to make this possible.

Do you wonder – WHO lives there?

What difficulties do they face?

How hard do they need to work to achieve such beauty?