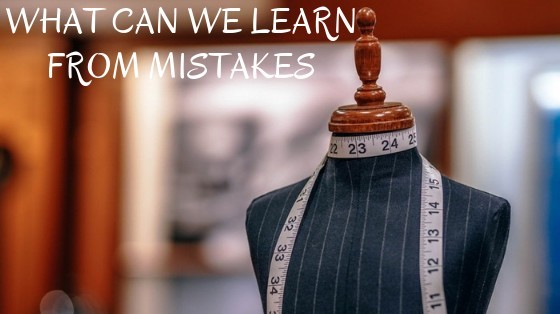 Oh my, where to start? It has always seemed a pity to me that we need to make mistakes from which to learn.

Wouldn’t it be wonderful if we could get it right the first time around? #whatwecanlearnfrommistakes I hear you ask?

Here are some of what I and others have learned from their mistakes.

THIS IS A VERY BAD IDEA One of my sisters was getting ready for her wedding, and on the big day, found that her husband-to-be had forgotten to have a hair cut.

No trouble to her, she decided cutting hair could not be such a difficult thing to do, and having had no experience whatsoever, she proceeded to cut his hair.

Well, it was a dismal failure. She cut a large chunk out of the back and to one side, she did not say anything to him but proceeded to cut another chunk out of the other side to match. How is that for innovation?

He was not entirely satisfied with the haircut but had no option but to try to get it sorted out and he ended up with very, very short back and sides.

She found that it from that mistake that it would have been better if she left things well alone.

I learned to cut hair by practicing cutting my little son’s hair to save costs as my husband decided to study at university after we had a child.

Making a mistake didn’t matter that much to a little chap and I was soon cutting my husband’s hair and that of other people. This brought in a bit of extra cash.
Unfortunately for my son, the one day moved his head while I was busy cutting, and I nipped his ear with the scissors.

Forever after that, he sat very still. (I felt terribly guilty).

It is a good idea when you go the hairdresser to watch carefully what she or he is doing, and then you can try that out on your own hair or that of your long-suffering child or spouse.

Between haircuts, at the salon, I regularly cut my own hair when it is at the stage that I cannot bear it anymore. I just strip off, in the bathroom, position a mirror so that I can see the back of my head, and off I go.

If things don’t work out so well, not a problem, after all, it will grow again, so what is the worst that can happen. I will just look a bit odd for a while, I guess.

My mother lost her mother to Motor Neuron Disease when Mom was 16, and so she didn’t have a lot of experience of learning to cook for a family.

After her mother died, Mom. And her father moved to Durban into a private hotel, so she had no chance to learn to cook there either.

Mom and dad married cooking was a huge learning curve for her. Imagine my father’s surprise when he bought some spanspek (melon) home for Mom and she boiled them. She hadn’t a clue what they were. My father never let her forget it.

Four children later gave her plenty of experience in cooking and baking.

We were all very grateful she learned from her mistakes.

My own cooking experiences were almost as bad, if not worse.

Soon after marrying I felt I should make a cake.

As I was mixing the cake, by hand, I was getting so tired of needing to add more and more milk, as the mixture was so stiff.

At that stage of our married life, I didn’t have an electric cake mixer. That pleasure would come later.

My husband questioned why I was getting so frustrated, and I was fed up and said so.

It irritated me so when he queried if I had perhaps made a mistake?
I was adamant that of course, I hadn’t

Eventually, I put this enormous, thick mixture into the baking pan and popped it thankfully into the oven. We waited and waited and the cake just did not want to rise or even cook.

By then, I had to call it quits, took the darned thing out and binned the horrific mess.

Misreading the recipe was my downfall.

What I had done was instead of putting in 4 oz. flour had used 4 cups. Thankfully I did not make that mistake again.

I made plenty of others along the way.

My husband was used to having his mother’s great cooking and he arrived home with a piece of salt beef for me to cook.

Not that I knew how to cook it. The only time I had seen such a large piece of meat was for roasting and that is exactly what I did with the salt beef, not realizing that it should be boiled.

It was a tough as nails and inedible. Poor Matthew had been looking forward to boiled beef and carrots as his mother would have made them and certainly not the dish I put up.

There are good reasons that patterns come with instructions, and when one thinks there are short cuts, forget it. It is not a good idea to fall in love with a piece of fabric and buy it without having the pattern with you, as you will need to have the instructions for –

Having messed up a perfectly lovely piece of fabric as I had not bought enough, and had to place the pieces incorrectly, taught me a hard lesson.

There are reasons to read all the instructions about positioning the fabric correctly. If you think you know better, you could end up with

A very good friend was asked to make a bridesmaid dress for a client. The beautiful fabric was supplied and the pattern but unfortunately something dreadful happened.

My poor friend inadvertently, without realizing how she did it, cut out the dress pattern the wrong size. It was far too small for the client, so she then had to go out and buy more fabric and remake it.

It was a very expensive mistake. Fortunately for her, she managed to find the same fabric and also had the time to make another dress in the correct size, and in time for the wedding. There must be many of us who have had our issues with knitting woes.

It wasn’t that long ago that I decided to knit a jersey for my husband.

I purchased some very beautiful, expensive wool but did not have a pattern which suited my purpose.

When visiting my sister-in-law in Riebeek Kasteel we went through the patterns she has and I chose one I thought suitable.

Well! It was the most frustrating time of my life trying to get the jersey to the correct size for Matthew.

This entailed a lot of pulling out, reknitting and still not satisfied with the result and many months into the project, I gave up.

Giving up is not something I like to do, but this jersey, the pattern and the wool I had chosen were my come-up-pence.  I pulled all my work out at gave the wool to a knitting group.

When my daughter was at school she had to learn to knit and decided that knitting a jersey could not be too onerous.

All seemed to go well until it went into the wash for the first time. She popped it into the washing machine, on a light wash, of course, and, set the machine going.

Mom went to take it out it was just a bundle of wool. The whole thing had comes undone due to the number of holes in the knitted garment.

Needless to say, she has not knitted since. Giving and taking instructions is crucial when getting things done to your own satisfaction, and the satisfaction of others. These are best done in your mother tongue, as my sister learned to her frustration.

She had a new gardener working for her and Pat thought she was fluent in Zulu, but apparently, not so.

She had asked the gardener tidy the garden but not to weed a certain bed as there were seedlings coming up, but to her horror, and I must say, anger when she arrived home the bed was completely clear. Not a green shoot to be seen anywhere.

Mom was venting to my father, he asked her what she had said. She told him in Zulu, and as my Dad was fluent in Zulu, he laughed and said,” Pat, he did exactly what you told him to do. I suggest you speak to him in English, next time.” My husband was always on at me about reading the instructions, so you can imagine my glee when I watched him attempting to put a special typist chair together and making a right muck up of it.

He tried it this way and that but nothing was coming right. “Did you read the instructions?”, I asked him.

With an embarrassed look, he acknowledged that he hadn’t.

After reading them, at last, the chair was successfully put together.

Some mistakes can be more embarrassing than others. One day, I was working in the kitchen and hearing a car drive into our back garden and feeling in a playful mood, I skipped out the back door and down the steps, singing “Why does and girl like me, love a boy like you?”, thinking it was my husband.

Can you just imagine the two red faces, mine and the assistant minister of the church?

I was just grateful I had more than just my pinny on. Haha!

We joked about this for a long time afterward, and I became more circumspect and checked to see who was arriving after that.

The mistake I make most often, and is for me is my biggest mistake is not to take my own advice.

In our day and age, it was expected of us to do exactly what we were told. No questions asked. We were not encouraged to have minds which differed from our parents’ way of thinking.

It was not done to question an adult and I grew up trying to please everyone. This was definitely not a good thing.

As I put myself under a tremendous amount of stress agreeing to do whatever was asked of me, eventually I began reciting a mantra, in front of my dressing table mirror, it goes like this, “I would love to help you but I am sorry I can’t.”

Unfortunately for me, I often forget to practice and will slip back into my silly ways and try to help the world and his dog.

For all of you out there who suffer this dilemma, I urge you to repeat after me – Ï WOULD LOVE TO HELP YOU BUT I AM SORRY, I CAN’T.